This guide serves as an orientation tool for new student workers in the library/learning commons.

How to read call numbers in an academic library:

From the Online Catalog to the Shelf: 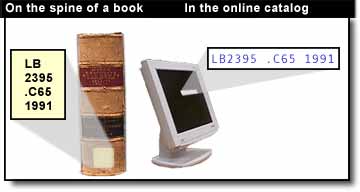 Tips for Finding Books on the Shelf:

Some call numbers may have more than one combination letter-number line.

Below is a sequence of books with the call number order explained: